Deconstruction work in the Old Senate Chamber began in earnest today.  MHT staffers, Marcia Miller and Thomas Reinhart, were on site assisting the contractors in removing building material and analyzing the newly uncovered evidence.  Heavy demolition was conducted by employees of the Christman Company, under the direction of Christman project supervisor David Overholt.  The Christman Company has been hired as the principal contractor for the reconstruction. 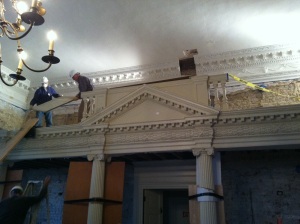 Architectural Historians, Mark Wenger and Jennifer  Glass from the Williamsburg, Virginia office of the architectural firm of Mesick, Cohen, Wilson, Baker directed preservation specialists in the delicate task of removing building fabric that would reveal evidence of the original form and finish of the Old Senate Chamber.  Contractor Mike Kelley of J.M. Kelley, Ltd., handled the dismantling of the 1905 gallery, the center pediment of which is being preserved as a record of the careful work undertaken by J. Appleton Wilson in the 1905 restoration. 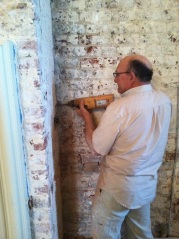 Also on site was master mason Ray Cannetti from St. Mary’s County, Maryland.  Ray removed bricks from the 1905 chimney breast looking for new evidence relating to the construction of the original chimney, which was demolished in the mid-19th century.  Surprisingly, Ray discovered that the 1905 chimney is 5 inches  wider than the 18th-century chimney was.  This may seem insignificant, but it translates into a firebox that was almost a foot narrower and several inches shorter; a size that is more in line with other 18th-century examples.
Mike Kelley and his crew painstakingly took down segments of the 1905 cornice which are to be preserved. This work exposed evidence of the location of the original 1770s cornice in the form of wood nailing blocks and filled pockets for wooden outriggers. These features confirm that the 1905 ceiling is 5-6 inched lower than the 18th-century ceiling.