There have been some really interesting heritage-related articles over on the MDP Smart Growth Blog recently, and we didn’t want you to miss them! Be sure to check these great posts out. 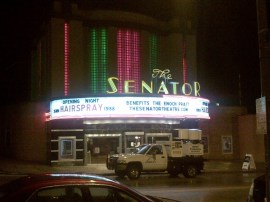 Modern multiplexes are not built like the Senator, which is 1930s stylish.

Baltimore’s historic Senator Theatre re-opened last night after 18 months of renovation. Built in 1939, the Art Deco movie house is beloved by Baltimoreans, spawning a Friends of the Theatre group, social media pages filled with gushing posts and a gaggle of celebrities for its grand re-opening. The $3.5 million renovation included an expansion from one screen to four as well as refurbishing murals, paneling, the floor and walls, and countless small architectural details. Modern multiplexes are not built like the Senator, which, with a circular stucco and glass block lobby, a semi-circular lit marquee, a black marble entrance façade and recreated Art Deco lighting fixtures, is 1930s stylish. 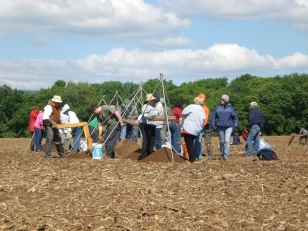 Volunteers at the Biggs Ford Site: Outstanding (out standing . . . ) in their field!

Over 10 days last spring, 130 Marylanders, volunteers all, made their way to a corn field near Walkersville and contributed more than 3,000 hours to  help investigate one of the most spectacular prehistoric archeological sites in the state. 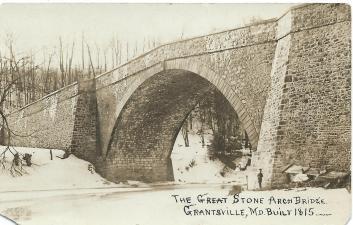 In 1755, George Washington and colonial troops forded the Casselman River in western Maryland to battle the French in southwest Pennsylvania, a key battleground in the French and Indian War.

Washington was not the only one to realize the best place to cross the river to head west. For thousands of years, Native Americans settled in the area known as “Little Crossing.” In the early 1800s, following Thomas Jefferson’s Louisiana Purchase that opened up the new West, the government built a bridge as part of the first federally funded road in the United States, the National Road.

The documentary film “Maryland’s Heart of the Civil War” received an Emmy Award from the National Capital Chesapeake Bay Chapter of the National Academy of Television Arts and Sciences earlier this summer. The film, which debuted last summer and has been broadcast on public television stations across the United States, features lush landscapes and compelling, real-life stories behind Maryland’s Civil War battlefields, military headquarters, museums and scenic byways.

Why do we choose to live where we do? 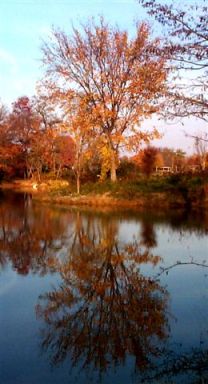 While economics is a significant part of the decision, public amenities are just as important – and in well-planned cities, towns and villages, those amenities are in easy walking distance and help knit the whole community together.  Schools are not just places to drop off the kids and hope that they learn something; they are community spaces where baseball or soccer might be played on their fields.  Exercise classes might be held in the gym or a drama group could be heard rehearsing a play.  My local library, which is a short walk away, offers, in addition to books, CDs and DVDs, movies in the afternoons and evenings and computer stations for anyone to use.  The neighborhood feels alive with activity.