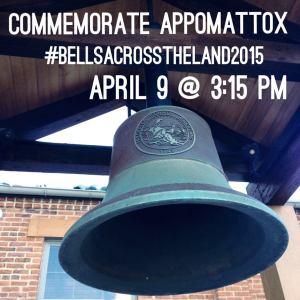 On April 9, 1865, after four years of combat, the Civil War came to a symbolic end in the tiny hamlet of Appomattox, Virginia when Confederate General Robert E. Lee surrendered to Union General Ulysses S. Grant. The surrender at Appomattox signaled the end of the long, harsh conflict which ultimately claimed the lives of 750,000 individuals and led to the emancipation of the nearly 4.5 million enslaved African-Americans held in the southern states, including Maryland.

On April 9, 2015, a nationwide event will commemorate the 150th Anniversary of the surrender with ceremonial bell ringing at the precise moment when the event occurred. To participate, organizations across the nation are being encouraged to ring their bells at 3:15 PM on April 9, 2015 for four minutes (symbolizing the four years of war).

Preservation Maryland, the statewide historic preservation organization, is helping to organize the event in Maryland and has been working closely with Maryland’s Heritage Areas to bring the event to every corner of Maryland. Multiple events are planned statewide, including many in the Heart of the Civil War Heritage Area in Frederick, Carroll and Washington counties.

Preservation Maryland will also host a special bell ringing at St. Anne’s Episcopal Church in Annapolis. Members of the public are invited to join us for this free commemorative event.

If you go to the Annapolis event:

What: Bell ringing & commemoration of 150th Anniversary of Appomattox surrender 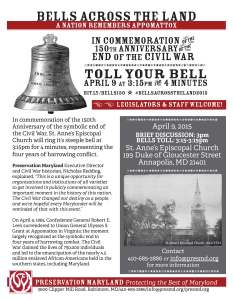