Volumes have been written about the sacrifices and victories of the many men and women who have fought for civil rights.   While the focus is often on individual leaders and national events, many of our black ancestors worked quietly in the shadows to create a better future for their descendents. These unsung heroes, working together within the framework of benevolent, masonic, and fraternal societies, made lasting contributions to their local communities, setting the groundwork for – and engaging in – the struggle for civil rights.  This article examines the presence, impact, and succession of several such African American societies in Calvert County, Maryland, , which is also the subject of an exhibit opening at the Prince Frederick Library on February 6, 2016.

The Baltimore Afro-American celebrated the Galilean Fishermen in an article on July 1, 1974, noting a current membership of 500.

Benevolent societies, or mutual aid societies, have existed within the black community in America since the mid-1800s.  Such groups assisted members of the black community with medical bills, provided burial services and burial grounds,  helped in recovery from catastrophic events like fires, and offered opportunities for social and professional engagement.   These groups had grandiose names, such as “The Order of The Society of Galilean Fishermen” and “The Grand United Order of Odd Fellows”. Each of these groups had a national governing organization with local lodges in many states, including in Calvert County, where previous generations of my own family were members.

The Galilean Fishermen, a benevolent society, was first organized in 1856 in Baltimore City, Maryland. It was founded by civic-minded black men and women. They performed services such as providing for the sick, assisting widows, and paying for funerals. Although the Galilean Fishermen were solely an African-American order, they used symbols borrowed from Scottish Rite Masonry.  The Galilean Fishermen flourished in and around Baltimore during the Civil War and then quickly expanded after the war, ultimately having lodges in nearly every county in Maryland and Virginia. By 1897, the Galilean Fishermen claimed to have over 56,000 members meeting in lodges from New England to the Gulf of Mexico. It is not known when the Galilean Fishermen first established a lodge in Calvert County.  However, like other lodges within the order, such as the Annapolis lodge, which opened a school on East Street in 1868, the Calvert County brethren made education a priority.  Land records show that in May of 1902, the Trustees of Tabernacle No. 47, of the Order of Society of Galilean Fishermen, purchased a tract of land measuring two roods and one perch (1/2 acre and 16 ½ feet). That parcel of land would, in 1921, become the site of the first Rosenwald School in Calvert County, the first school in the county to offer a high school curriculum to African American students.   One of those Trustees was my mother’s grandfather, who lived from 1864 to 1957. We can assume the other members were in the same age range.

The Central Industrial School in Prince Frederick, built in 1921 on land purchased by the Galilean Fishermen, was the first Rosenwald School in Calvert County.

Many men of my grandfather’s generation were active in the Odd Fellows.  From 1947 to 1953, my father’s father served as the Treasurer for the St. James Lodge, No. 11070 of The Grand United Order of Odd Fellows.  Their records show an active support for civil rights issues and particularly the Maryland Public Accommodations Act, which finally passed in 1963. The Act “prohibited discrimination in public facilities licensed by the state, including hotels, restaurants, recreational places, and theaters” (Coffey).  My grandfather lived from 1888 to 1966, so once again the age of members became a key consideration in the rise and fall of the organization’s fortunes. 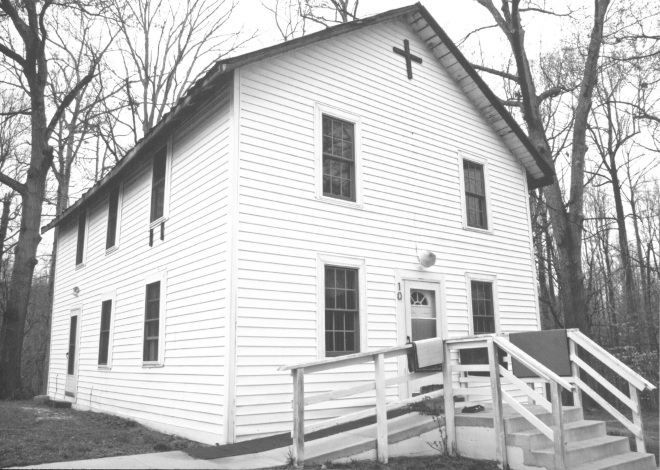 The St. James Lodge #11070 of the Grand United Order of Odd Fellows and the Alfred E. Young Lodge #99 of the Prince Hall Grand Lodge shared meeting space in their ca. 1930 lodge in Huntingtown.

The civil rights baton was taken up in the 1960’s by The Prince Hall Grand Lodge Freemasons. The formation of the organization traces its roots to the efforts of a group of black men who joined a British army masonic lodge in Boston during the Revolution.  Subsequently denied a charter by the Grand Lodge of Massachusetts, a group led by Prince Hall, a free black leatherworker born in the West Indies, successfully obtained a charter from the Grand Lodge of England in 1787.  Initially known as the African Grand Lodge, the group later changed its name to honor its first member.  Prince Hall Freemasonry spread steadily across the country, with membership taking off in the early years of the twentieth century, reaching all-time highs in the 1950s.  Distinct from benevolent societies, Prince Hall Masons have traditionally focused on morality, social leadership, and civic engagement.

Not surprisingly, during the 1960s Prince Hall Freemasons in Calvert County were immersed in the growing civil rights tensions.  On January 25, 1964, The Afro American newspaper reported the following; “For years, the Calvert County Colored citizens, many of whom migrated to Baltimore to get away from the oppressive racial segregation in that County have complained…” “The County exempted itself from the Public Accommodations law and its Schools are 99 to 100 percent segregated. All over the County, as well as in Maryland, Colored people are making great sacrifices, going to jail, and even dying for our civil rights”.  There were multiple Prince Hall Freemason lodges in Calvert County during the 1960s, including Victoria Lodge 71, which still exists today and is active in supporting the black community.

We should not limit our appreciation of our courageous ancestors to only one month a year, but we should honor their memory each day, by building upon their work.

Michael Kent is a native of Calvert County, Maryland where his family has grown tobacco and raised cattle since 1780.  After graduating from the University of Maryland, College Park, Mr. Kent received a juris doctorate from the University of Maryland School of Law.  Mr. Kent spent 3 years in the United States Naval Reserves as a Judge Advocate General officer before serving as an assistant state’s attorney for both the Baltimore City and Prince George’s County State’s Attorney’s offices. Currently, Mr. Kent is working with 25 other African American farmers to convert their properties to solar and wind farms. He can be reached at: mgkent57@gmail.com.

Skocpol, Theda, Ariane Liazos, and Marshall Ganz.  What a Mighty Power We Can be: African American Fraternal Groups and the Struggle for Racial Equality.  Princeton: Princeton University Press, 2006.  Accessed here.