As a graduate student in the University of Maryland’s School of Architecture, Planning, and Preservation, I had the opportunity to spend over a year interning with the Maryland Historical Trust and to work on a personally significant project – documenting the Maryland women’s suffrage movement. 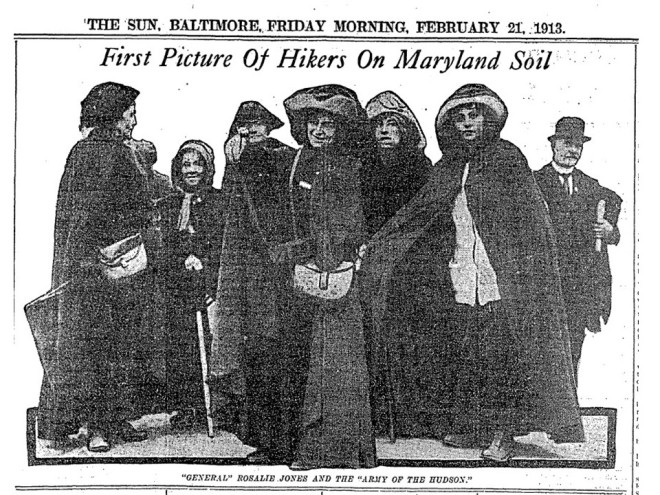 Image from the Baltimore Sun article “Maryland Is Invaded,” which detailed the Elkton, Maryland stop on the 1913 suffragists’ march from New York to Washington, DC.

Generously funded by the Maryland Historical Trust’s Board of Trustees, this special project allowed me to develop a history of the statewide women’s suffrage movement and to identify significant suffrage sites, a timely endeavor as we approach the 100th anniversary of the passage of the 19th Amendment. Before this research, we had little idea that that Maryland’s suffragists (a term they preferred to the derogatory “suffragette”) had been so active or that they had worked in dozens of hitherto forgotten places around the state. In previous blog posts (which can be found here and here), I highlighted two of these stories and two historic sites with previously overlooked connections to the movement.

Now, I’m excited to share one of my final projects: a story map that presents a chronological overview of the important places and milestones of the Maryland suffrage movement. This story ranges from the earliest beginnings of the movement to the final passage of the 19th Amendment, showcasing Maryland women’s dedication to this long fight.

The women’s suffrage story map can be found on the Maryland Historical Trust website.

Though my internship has almost ended, I’m happy to see that this important project will continue. My research will be used by Maryland Historical Trust staff to nominate significant women’s suffrage sites to the National Register of Historic Places and will support other statewide efforts to preserve these sites and tell their stories.