The Reverend Josiah Henson’s legacy is one of resilience. He and his family escaped slavery in Maryland in 1830, heading north and eventually settling in Ontario, Canada. Once there, he founded a community for escaped slaves called the Dawn Settlement. While I only recently learned about Henson’s accomplishments and his connection to Maryland, it’s clear to me that the story of his life is worth sharing far and wide.

In high school, I read Uncle Tom’s Cabin by Harriet Beecher Stowe. I remember that my teacher credited this book with helping raise awareness about the brutalities of slavery and laying the groundwork for anti-slavery sentiment, which would propel the United States into the American Civil War. This novel, published in 1852, told the story of an enslaved man referred to as Uncle Tom whose journey begins in Kentucky. Over the course of the plot, he travels down the Mississippi River to New Orleans.

As a high school student, I didn’t think to ask how Harriet Beecher Stowe—a white woman from Connecticut–knew about the brutalities of slavery. It turns out that she based many of the experiences she described in her famous novel on firsthand accounts by former slaves, including the autobiography of Josiah Henson, which was originally published in 1849.

Henson was born in Charles County, near Port Tobacco, and spent much of his childhood and early adulthood enslaved on the plantation of Isaac Riley in Montgomery County. The stories of enslavement that he shares in his dictated autobiography The Life of Josiah Henson, Formerly a Slave, Now an Inhabitant of Canada, as Narrated by Himself are Maryland stories. His childhood was marked by the horrors that many enslaved people endured: violence, abuse, and family separation. As Henson shares in his narrative, Riley recognized him as very intelligent and delegated many responsibilities to him. Henson also became a reverend in the Methodist Episcopal Church. When he attempted to buy his freedom, Riley cheated him, and he feared being sold away from his family. This is where Henson’s story as a free man begins. He escaped slavery in Maryland, eventually settling in Canada with his family and establishing the Dawn Settlement.

Today, Reverend Josiah Henson’s story of perseverance and courage is finally being etched into the Maryland landscape, and finding its way into the consciousness of Marylanders. The site in North Bethesda that used to be known as the Riley Plantation is now Josiah Henson Park, part of Montgomery Parks. In 2018, the Montgomery County Heritage Area expanded its boundaries, adding this site—and a host of others. As a result, the Montgomery County Parks Foundation applied for and was awarded a Maryland Heritage Areas Authority (MHAA) matching grant to design and install new exhibits at Josiah Henson Park’s on-site Visitor Center, currently under construction. The exhibit will feature an introductory film, original illustrations, and artifacts excavated at the Riley Plantation site. Shirl Spicer, Museum Manager for Montgomery Parks, said she is excited for people to see the exhibit because the artifacts paired with dynamic, evocative illustrations will allow visitors to engage with Henson’s story in new ways.

Even before the park re-opens with its new and enhanced visitor center and exhibits, Shirl Spicer assured me that her organization is actively spreading the word about Reverend Josiah Henson in Montgomery County through outreach at community events and schools. Plus, a brand new in-depth Josiah Henson biography was written by Montgomery Parks’ senior historian, Jamie Ferguson Kuhns, and published in February 2019.

Knowing what I know now about Henson’s remarkable life and autobiography, it feels like an injustice that I had never heard the name Josiah Henson before the Montgomery County Heritage Area submitted their boundary amendment materials to MHAA last year. However, just over the past year, I’ve started noticing his name in press coverage. In addition to Henson’s own autobiography, interested readers can learn more about Henson’s story here, watch video content about his life here, and watch an interview with his descendant here. All these sources are no substitute for visiting Josiah Henson Park itself. The Park and the new exhibits, funded in part by MHAA, are slated to open to the public in 2020.

On March 21st at the Miller Senate Office Building in Annapolis, Augusta T. Chissell will be inducted into the Maryland Women’s Hall of Fame, joining seven other notable women honored for their achievements and contributions to the State.

Maryland women suffragists played an important role in the passage of the 19th Amendment, which granted women the right to vote in 1920. State suffrage leaders, including Augusta T. Chissell, developed a robust network of grassroots organizations across Maryland, greatly shaping the fight for women’s rights. While the work of these activists has largely been forgotten, this is particularly true for African American suffragists, who were excluded from prominent suffrage organizations and omitted from newspaper coverage and organizational records. Early twentieth-century African American suffragists’ work was particularly important at a time when Jim Crow laws sought to undermine hard-won civil rights.

Augusta Chissell was an important African American leader of the women’s suffrage movement in Baltimore City in the early twentieth century. Chissell had deep roots in Baltimore’s women’s clubs, which fostered leadership skills as they promoted causes including education, healthcare, and prohibition. She was an officer in Baltimore’s Progressive Women’s Suffrage Club and held a leadership position in the prominent Women’s Cooperative Civic League. Chissell, her neighbor Margaret Gregory Hawkins, and activist Estelle Young were part of a black middle class who lived and worked in neighborhoods now part of the Old West Baltimore Historic District. The close proximity of these organizations’ members, driven by residential segregation, made it convenient for them to hold meetings in their homes, and they often gathered at Chissell’s home on Druid Hill Avenue in Baltimore. 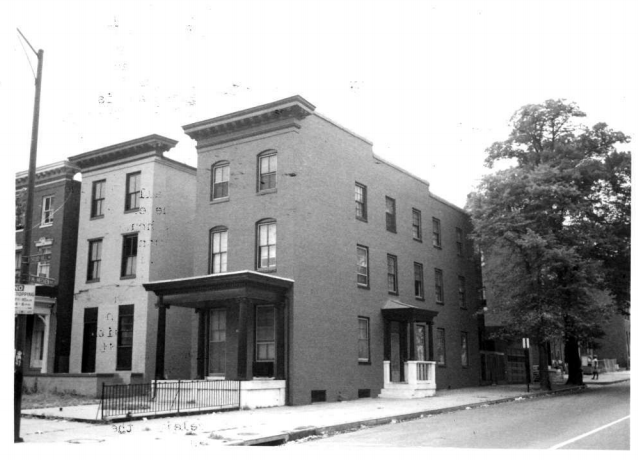 In the early twentieth century, the women’s suffrage movement began to secure the support of important state and national organizations. In 1914, the National Association of Colored Women’s Clubs (NACWC) endorsed women’s suffrage, and local clubs and associations moved quickly to draw further public support by holding mass meetings. The first public meeting of the Women’s Suffrage Club drew a large and enthusiastic crowd to Grace Presbyterian Church in December 1915, and in 1916, the NACWC brought their biennial national convention to Baltimore, where the suffrage movement was a major topic of discussion.

Following passage of the 19th Amendment, Chissell authored “A Primer for Women Voters,” a recurring column in the Baltimore Afro-American that offered guidance to new African American women voters. She organized training sessions for women at the neighborhood Colored Young Women’s Christian Association (CYWCA) after women got the vote, and later served as the Chair of the Women’s Cooperative Civic League and as Vice President of the Baltimore branch of the NAACP. The Women’s Club used the CYWCA to hold weekly ‘Citizenship Meetings’ for new women voters and ongoing lectures on voting and civic responsibility.

Augusta T. Chissell’s legacy endures in her former home at 1534 Druid Hill Avenue, where she lived during her decades of civic activism, and in the former CYWCA building at 1200 Druid Hill Avenue, where the Women’s Suffrage Club began hosting public meetings in 1915. As the 100th anniversary of the passage of the 19th Amendment approaches, Marylanders should honor and celebrate strong women like Augusta Chissell, whose decades of civic activism laid the groundwork for so many of us.

Tomorrow’s event is sold out, but the Maryland Historical Trust will post photos of the induction ceremony on social media. To explore the story of women’s suffrage in Maryland, visit MHT’s storymap “Maryland Women’s Fight for the Vote.”